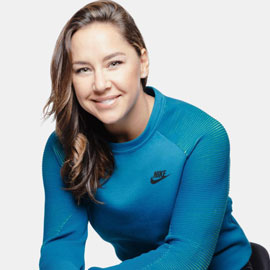 Three-Time Paralympic Gold Medalist
Triple Threat Athlete in Alpine Skiing, Basketball and Sprint Kayaking
Alana Nichols is a world-class athlete with a passion for challenging herself
and others. From a young age, her passion for sports and adventure has
driven her and no matter what obstacle life throws her way, she takes
a challenge head on. After suffering a spinal cord injury at age 17 while
attempting a back flip on her snowboard, Alana quickly transitioned to
adaptive sports. She is the first American female to win gold medals at both
Summer (Wheelchair Basketball) and Winter (Alpine Ski Racing) Olympic/
Paralympic Games. Alana competed at her 5th Paraplegic Games in 2016
games in Rio De Janeiro in her 3rd sport of sprint kayaking and is now
pursuing adaptive surfing full time and continues to inspire and attract fans
from around the world.