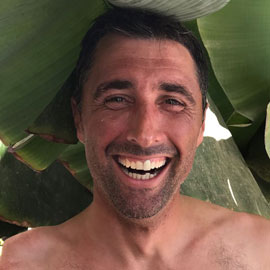 I live in the Basque Country where mountains and sea mingled, I practiced surfing and snowboarding. Following an accident at work, I was amputated in 2010.

Six months later, I was back on a snowboard and the season after I became champion of France of para snowboard. One year and a half after I started surfing again and last year I finished fifth at ISA world adaptive surfing.